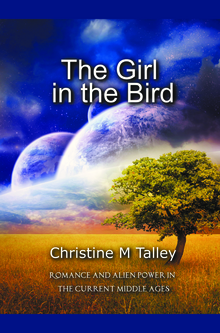 The Girl in the Bird

This is the story of a group of individuals in the Society for Creative Anachronism, a medieval reenactment organization. It chronicles the romance between a handsome sword and shield fighter and an unlikely heroine and her friend's rocky romantic journey that includes a life threatening hurdle. It also tells the story of a teenager with a developing alien power and its part in Earth's future. The author, Christine Talley, is a wife and mother of two sons. As Clotilda Warhammer of Mistwraithe Hall, she was a sword and shield fighter in the Society for Creative Anachronism for nine years. She participated in numerous battles, along with a thousand other fighters, during nine Pennsic Wars and other events, when she wasn't working as a registered nurse. Her hobbies have included caving, rock climbing, hiking, camping, heavy weapons fighting in the SCA, drawing and painting.