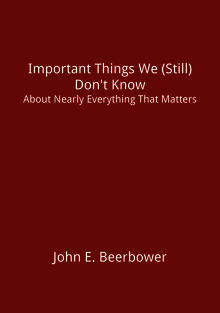 Important Things We (Still) Don't Know: About Nearly Everything That Matters

An analytical and skeptical exploration of exceptional breadth, this book examines the range of what we call the sciences, revealing the important things that we still do not know about nearly everything that matters.

"The perspective of this book differs from that of most books that one would find in the popular science section of a library or bookshop. I do not undertake to surprise or educate the reader with examples of the marvelous discoveries of science and the amazing things that we have come to learn about the world around us. Instead, and of more importance, I try to show the reader what we do not know, illustrating both the scope and the depth of our ignorance. ...The point that I seek to establish in the following pages is that despite the astonishing achievements and practical consequences of technology, science has been remarkably unsuccessful. Upon a close examination, the lack of actual knowledge about and real understanding of the deeper fundamentals of reality are among the most striking and suprising characteristics of modern science."