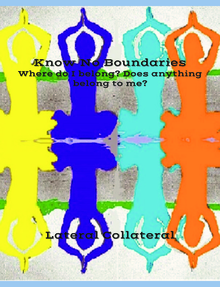 Know No Boundaries: Where do I belong? Does anything belong to me?

Six married couples, including John and his wife, gathered in a spouse swapping camp; men won the toss and chose partners for a week. Five years later, same couples assembled in another camp with the same mission; women won the toss and chose their men, this time for a year.
The same six couples camped again to explore John’s vision of One World with no country boundaries. How would they lead non-violent, intelligent disobedience of visa restrictions for moving across boundaries?
It is neither a thesis, nor it is a novel,
Not it is a fantasy, not even a fairy tale.
With an event of mass disobedience we start,
No shot is fired, no one is physically hurt.
On a sunny day, at every airport of the world,
People queue up for check-in with no visa in hand.
One and all, in all the classes – economy, first or business,
No one had a visa; world citizenship each like to harness.
No international flight takes off
From Wellington, where the day starts;
From other airports of New Zealand too,
No other plane departs.
Nowhere in the world, from any airport,
Took off any International flight.
Following day was no different,
And the following night.
All airlines give up,
No end of the tunnel, no ushering light.

The main suspect behind these events was John.
John’s identity is however very clear;
To all passengers he is very dear.
For questioning his role in mass disobedience,
Arrested was John, and served punishing sentence.
He was punished to undergo forensic probes,
For extracting his memoir and his hopes,
To get the events that led him to his roles,
To his visions to cross boundary ropes.