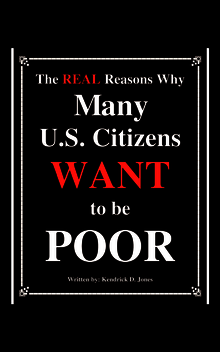 The REAL Reasons Why Many U.S. Citizens WANT to be POOR

Author Kendrick D. Jones offers his first controversial, thought-provoking book that will shock and unravel minds throughout the nation! In today’s economy, there are close to 100 million citizens either living in poverty, unemployed or headed in this direction, and Jones boldly gives you hard-hitting facts and insightful reasons as to why many U.S. citizens are poor today. As you are exposed to the essence of what NOT to do to become poor, you are simultaneously propelled to open your mind and learn what TO DO to become wealthy.

THE REAL REASONS WHY MANY U.S. CITIZENS WANT TO BE POOR will reveal the vital importance of finance, budgeting, parenting, fighting what you can’t see, successful planning, identifying silent weapons for quiet wars, etc. He presents earth-shaking concepts and alternative methods of thinking about life and becoming financially successful that will blow you away! By programming the information from this book into your subconscious mind, you will begin to notice a shift in your own behavior and how other people attract to you.

Have you ever wondered…

• Why most poor U.S. citizens can’t visualize building the foundation of a generational empire of wealth that will last for the next 500 years?
• Why most poor people love to be stagnant and remain in their conditions of mediocrity?
• Why most poor people will not use a greater percentage of their brain power?
• Why poor people, collectively, have over a trillion dollars in spending power, but are scared to use it to benefit them?
• Why poor people gossip about each other and refuse to work together as oppose to wealthy people investing billions of dollars in other wealthy people’s multi-national corporations?
• Why many poor parents indirectly train their children to be poor, but wealthy parents train their children to control the majority of the wealth in the United States for centuries?

This book answers all these questions and more!!