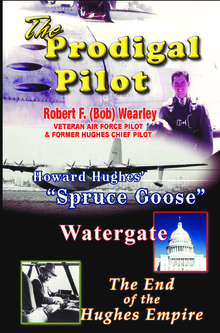 The Prodigal Pilot: The End of the Hughes Empire

Robert F. (Bob) Wearley served as Chief Pilot of Howard Hughes' personal fleet of aircraft, in addition to his long and distinguished flying career in military, corporate, and commercial aviation. In his book he gives readers a behind-the-scenes look at the often strange, always eccentric inner workings of the Hughes Empire. Bob also details the connection between the Hughes organization and the Nixon White House and reveals the real reason why Nixon ordered the Watergate break-in that ultimately forced his resignation. Along the way, he was exposed to challenges that compromised his integrity, resulting in the title of Prodigal Pilot he chose for the book.