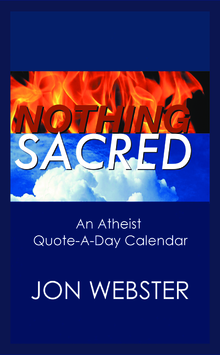 Nothing Sacred: An Atheist Quote-A-Day Calendar

The greatest thing about this book is it can be read year round any year. Featuring noted atheist birthdays with their most profound quote on that day and only the best quotes from the most prominent freethinkers ranging from U.S. Presidents such as Barack Obama and Abraham Lincoln to Nobel Prize winners to Sagan, Dawkins, Hitchens and Harris, this book is a excellent way to arm yourself with arguments before debating that next theist.

Jon Webster grew up in a Christian home, going to a Christian middle school, graduating from a Southern Baptist college, and had been a "born-again" Christian for 16 years when he finally decided to read the Bible cover to cover for himself. This led him to become an atheist. Jon someday hopes to do groundbreaking research in the field of psychology but until then will settle for going on the O'Reilly Factor and explaining to Bill how the tides work.