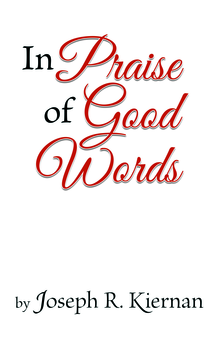 In Praise Of Good Words

In praising “Good Words” Joe Kiernan offers readers insightful reflections on selected writings from a variety of writers over the last three quarters of a century. The label “Good Words” conveys a reader’s personal appreciation of content, whether the subject matter involves a beloved teacher, a war hero, a literary or theatrical gem or a statement of faith. The entertainment here is finding Douglas MacArthur, Bob Dole, Richard Nixon, Donald Rumsfeld, Tucker Carlson, Mickey Mantle – and Dorothy of the Magical Kingdom of Oz - to name a few, sharing the pages of this intriguing commentary on other people good words.

AUTHOR
Joseph R. Kiernan was Director, Corporate Policy, RCA Corporation and managed a systems consulting group for General Electric. After retirement, he was President, Princeton Administrative Systems, Inc., a systems consultancy for over two decades. With degrees from St. Joseph’s University and Temple University, he was an adjunct professor of Sociology at St Joseph’s for 28 years. His previous books include The Only War I Ever Attended (2002), recounting his WWII Air Force experience as a B-24 Ball Turret Gunner in Europe and Life As a Guest (2007), a lively memoir plus two Philadelphia basketball books, Wartime Cinderella (2009) and Billy Markward and Friends (2015). In his ninety-third year, he now observes the world scene and its “good words” quietly from his residence in Bucks County PA.