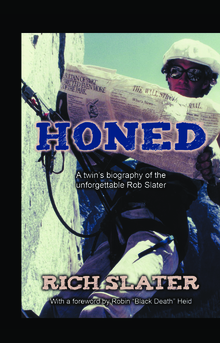 Honed: A twin's biography of the unforgettable Rob Slater

I know about Robbie because I am his identical twin brother. I called him Robbie and he called me Richie. As we got older, we were called Rob and Rich by others, but between us it was always Robbie and Richie. We were in many ways as similar as two human beings could be. We looked alike, talked alike and even liked the same kind of Pop Tarts. But when it came to living life, Robbie went much further out on that razor’s edge, staring down The Reaper and thumbing his nose at disaster than I ever had the courage for. I have never been afraid of dying, but my twin brother had a much greater need for adrenaline and danger than I’ve ever felt. Quoting the infamous Charles Manson, Robbie used to joke he “was crazy back when being crazy meant something.” But it was much more than that.