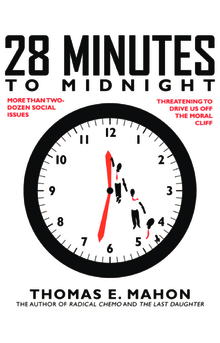 28 Minutes to Midnight: More Than Two-Dozen Social Issues Threatening to Drive Us Over the Moral Cliff

The moral cliff is fast-approaching.

We're well-aware of the dangerous moral cancers exposed in Thomas E. Mahon's previous work, "Radical Chemo": Moral Justifications, Individualism, Relativism, Secularism, Fundamentalism and Moral Compartmentalization. So what is it that we're doing? We're hitting the brakes, right? Well, not quite.

Given how we're dealing with issues like the use of the N-word, the worship of Earth, raising brats and narcissists, predicting disaster through global warming, spending obscene amounts of money to elect our presidents and fostering the continuing conflict between science and religion, we're actually accelerating toward that cliff.

Take the plunge into "28 Minutes to Midnight".

Most of all, let's find that brake pedal.

Thomas E. Mahon is a 26-year educator. His previous works include "Radical Chemo" and "The Last Daughter". He lives in South Florida with his wife and three children.