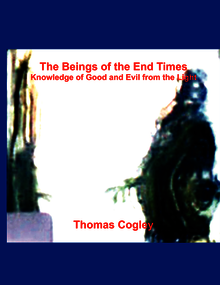 The Beings of the End Times: Knowledge of Good and Evil from the Light

This work The Beings of the End Times: Knowledge of Good and Evil from the Light follows the format of two other publications by the same author namely, The Revelation of John: Sent Again in the Form of Pictures and the soon to be released The Deep Mysteries of Satan. These works use pictures to substantiate what is written in the text but the pictures are unique in form and in the way they were gathered. All the pictures come from fleeting pulses of light and are not of stains or solid objects. They have been collected at different times of the day and year from buildings their windows; sunsets; sunrises; the sun itself; bodies of water and reflections on solid objects. Essentially these pictures come from what is in the light that surrounds all of us and falls upon us. The images placed in this work are those of the beings that are to arrive in the end times and have described in ancient religious texts including the Bible; lost Books of the Bible; Greek Roman and Egyptian Mythology texts and many more. However, they closely follow many of the creatures described by John in his Revelation. There are more than 2100 images in this book. All have been placed on pages with a short rhyming text that describes them or their actions in the end times. In short the pictures shown in this work are miraculous and have been presented without alteration other than cropping and sharpening. Due to the spiritual nature of the images the beings are sometimes slightly out of focus and are part of other beings smaller and larger. These characteristics are the nature of spiritual things as described by Jesus when he was on earth.