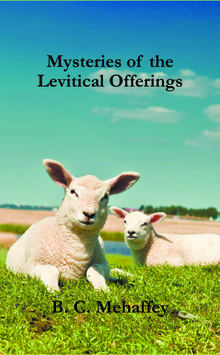 Mysteries of the Levitical Offerings

Many Christians are glad the Levitical offerings are not being performed today and assume Jesus fulfilled the significance of the offerings. What many people don't realize is that these offerings will be offered during the millennial reign of Christ. If this is to be the case, it could be possible that not every aspect of the offerings were fulfilled by Christ nor were meant to be. It's likely that Jesus' sacrifice has made it possible for the remaining shadows of the offerings to be made manifest at some point in the future.

Mrs.Mehaffey has been studying the Bible by using thematic connections (parallels) found in Scripture for several years. She has written over 100 blog posts which contain conclusions based on thematic analysis of Scripture and encourages believers in Christ to study the Bible while keeping in mind the original language and culture of the Jewish people.