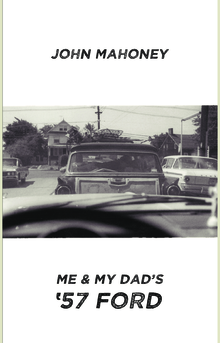 ME AND MY DAD'S '57 FORD is the third and final book about a young boy and his fascination with cars. In the first two books, John's rambunctiousness from 1954 to 1962, can be forgiven because of his age. But in this final installment, John is entering his teen years and therefore maturing...slightly. He still likes cars, but he is also discovering the wonderful world of the opposite sex, even though that discovery does him little good. He is the tallest of his friends, thereby becoming a fairly good athlete, as long as he plays sports in his own neighborhood.
As he approaches the age of a licensed driver, car owner, and high school graduate, John hopes his Father wil hand him the keys to the Ford, the car John truly loves. With the Vietnam War and military draft on his horizon, John begins planning his future while reflecting on his less than srtellar behavior of his younger years.
If ever there was an axiom to describe John's life, it has to be: "The best laid plans of mice and men often go awry."