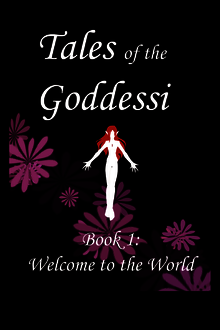 Tales of the Goddessi: Book I: Welcome to the World

Every Tale has its beginning, though this one begins in the middle.

In the World of the Nine Goddessi, in the South Woods where the branches of the trees twist so tightly amongst themselves that light only bleeds through at the height of noons, a strange girl is born, fully grown and fully clothed.

At her side is a man whose touch burns her skin and a beast who appears and disappears like a shadow.

In her head is a voice that insists it is the real owner of both her body and her Tale.

She is led through the World by the man with the burning hands until he bursts into flames and falls to ashes. A chat with the goddess of death assures her that he is not dead but still at large somewhere, beginning her journey through the lands of the World.

But while every step changes her Tale, her Tale begins to change the World, for she is like nothing the World has ever seen.

Welcome to the World

Travel the World of the Nine Goddesi, the burning lands of the Greater and Lesser Deserts where the orthodox fire goddess's worshipers hunt and race and war among themselves.

Watch the barely-clad bathing beauties of the water goddess by the lakes and on the shore of Kalilandrau, the Great Salt Sea.

The stolid stone people carve their homes from the hearts of mountains and carve a trade track for ever-moving Caravans across the World, even unto the White Lands where the people of the Fallen Star go about ever in masks and create things too wondrous to be mere magic.

In the forests where the Twins reign, their worshippers live in eternal twilight and bend their backs at hoeing grains and drive their herds through the dangerous swaths of highgrass where the Bane lie in wait to steal children and cut the throats of intruders to drink of their blood.

But should these dangers overcome you, the grey people of the goddess of Death will be there to guide you to the Far Lands, where good and bad go alike to live again.

And beyond it's strange geography and cultures, the World is an even more foreign place. Here, men make Tales. And Tales make men and thing far stranger than men.

In the World, all Tales are true.