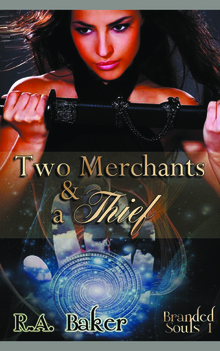 In book one of Branded Souls: What happens when a land has no great warriors or wizards to save it from disaster? Who will
answer the call?

A powerful ruling sorcerer known as the “Chaotic Prince” has set his sights on a city of mortals called Jhargus. He intends to conquer that land and crush its people with his magical might.

Two young merchants, Kelric and Laran, are like day and night. One—thoughtful and kind—the other brash and often cruel. When fate has them cross paths with a beautiful, yet mysterious thief, their lives are forever changed.

The thief leads them through a magical portal where the three are left, not only in another world, but with the palms of their hand covered with a strange, circular emblem. The symbols are etched into their skin…like a brand. They soon find out the Eternal Brands grant those who possess them great power—binding its ancient magic to the very souls of their wielders. And so, two brother merchants, along with the thief, are all who stand between the Chaotic Prince and the future of Jhargus.