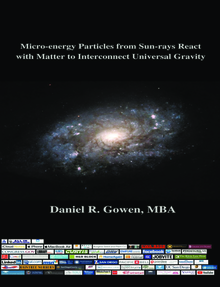 Universal Energy (UE) transfers without care, intelligence controls energy, and Peace is the balance, so be Universally Kind with an ethical Love-Lighton. Knowledge and understanding of the Principles of Universal Energy transfer explains and solves every unknown, natural phenomenon in the Universe. I'm thankful for the August 3, 2019 news-article on Einstein’s Facebook that requested for someone to solve Universal Gravity, which caused me to think insightfully with a spark of energy that shined a light on my Sun-ray micro-energy particle interconnecting gravity for my Universal Energy Theory. I changed the name to Universal Energy because gravity is only the negative force that reacts after a positive force is applied. I began thinking about Sun-rays, where I theorized that the Sun-rays break down into individual particles of micro-energy and transfer through atoms in the atmosphere, and onward into planetary polarity to the planet's core, and through space to galactic Black Hole Equalverse equilibrium circuits, where a Reformation Processes creates new matter and Star Solar Systems. I've been assured by many Scientists in News reporting that My Theory has prominence for Scientific Laws, and I believe will become a fundamental building block of Science education.