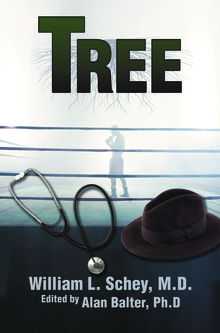 Tree is a young man, William Dunn the Third, who got his nickname when a young cousin couldn't pronounce the word "three." He goes on to marry his high school sweetheart while pursuing a career as a professional prize fighter. He moves up the ranks until he is ready to fight for the world championship in the welterweight division.
An attorney, with close ties to the mob, forces him to throw the fight. Such an action is unconscionable to Tree; however, he comes to realize that if he doesn't capitulate, the fight will not happen, and he will never fight for the title again. After his loss, he decides to retire from the ring and pursue a career in medicine, specializing in radiology. Fifteen years later, his
competitive instincts awaken, and this time he wins the title although the results remain clouded by mob influence.

William Schey, MD, is the author of Tree. He studied at Northwestern Medical School and was affiliated with Michael Reese Hospital where he practiced pediatric radiology. He has been practicing medicine in Chicago for more than fifty years, and he continues to work at the University of Illinois Hospital in the city.