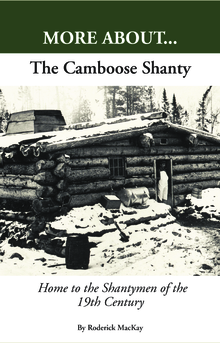 More About...The Camboose Shanty: Home to the Shantymen of the Ottawa Valley

This book provides information about the type of structure which housed the shantymen of the Ottawa Valley, during the lumbering period of the 19th Century. Included are quoted passages, both of contemporary observations and later recollections, about the construction and layout of the camboose shanties which served as kitchen, dining-room, living-room and bedroom all-in-one. Each narrative provides a slightly different perspective. Also included are details regarding the life-ways of the men who made it their home for the winter, year after year.

This volume also describes the supplies needed in the camps and the manner in which both men and supplies were transported to the camps. There is also a chapter about the replica Camboose Shanty on display at the Algonquin Logging Museum in Algonquin Provincial Park, Ontario.