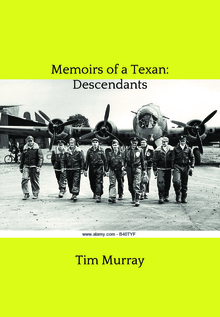 Memoirs of a Texan: Descendants

Jim, Missy, Andy, Martha, Robert, Pearl, and others of the Memoirs of a Texan saga have descendants who encounter, as they did, issues of their time.

Following Jim Cobb's death in 1923, Cobb, Morgan, Savage, and other descendants contend with

As prelude to the coming catastrophic Second World War, the Spanish Civil War erupts in a brutal conflict with Fascist and Communist sponsors.

America is ill-prepared to fight Nazis in Europe and Japanese in the Pacific, but recovers and prevails by the courage of her armed forces and economic strength.

America is drawn into the Vietnamese quagmire and defeated by a determined nationalist enemy.

Islamic fundamentalism forces America to intervene in Iraq and Afghanistan.