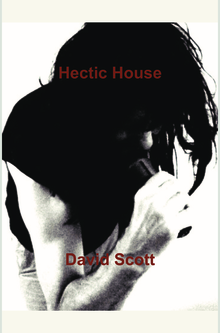 Hectic House is the story of an underground punk band attempting to get by during the late 80's. Roger Stephens, the lead singer of the band Hectic House, must deal with a chaotic lifestyle including no management, violent audiences, suicide attempts, a pregnant girlfriend and being arrested for a murder he didn't commit.

Author David Scott spent some of his life as a bass player in two or three obscure, completely unknown punk bands during the 80's. He figured he might just go ahead and and turn some of those memories into a novel. Mr. Scott is a Vocational Counselor in the San Francisco Bay Area, living with his wife, son, 2 canaries and an adopted greyhound.