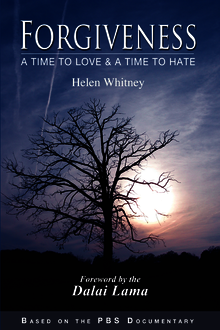 Forgiveness: A Time to Love and a Time to Hate

“Forgiveness is elusive, mysterious, primal…an idea and an ache, which is rooted in existential concerns. But too often forgiveness is presented as a simplistic valentine celebrating New Age pieties: exhorting us to forgive and criticizing those who cannot as spiritual underachievers,” notes Helen Whitney. “My intention is to complicate this vitally important subject and to explore not only the power of forgiveness, but its limitations and dangers.”

This book addresses the act of forgiveness, which is a theological principle central to all major religions, but is more and more frequently leaving the church, synagogue and mosque and hitting the fractious streets. Inevitably its new role in the world raises serious and complex questions: why is forgiveness in the air today; what does that say about us and the times we live in; what are its power, its limitations and in some instances its dangers; has it been cheapened or deepened … or both? Forgiveness: A Time to Love and a Time to Hate seeks to shed insight into the light and darkness – the presence and absence – of forgiveness.

Forgiveness: A Time to Love and a Time to Hate illuminates the spontaneous demonstration of forgiveness following the 2006 shooting of Amish children in Nickel Mines, Pennsylvania; the struggle of ’60s radicals to cope with the consequences of violent acts of protest; the shattering of a family after the mother abandons her husband and children and then returns, seeking forgiveness; the legacy of post-apartheid Truth and Reconciliation Commission hearings in South Africa; the penitential journey of modern Germany, coming to terms with its history; and stories of survivors of the Rwandan genocide.