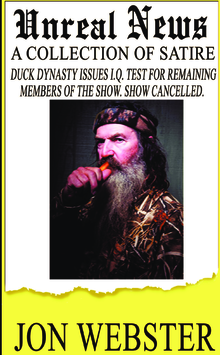 Unreal News: A Collection of Satire

"Hilarious!" "Funny stuff!" "That's funny!" These are just some of the reviews of the contents of this book. The title of the original site to which many of these articles were published was Unreal News Online. Its tagline was "We write the news stories you won't hear about anywhere else. You can make this stuff up; because we did." The site description reads "Some people look at the way things are and ask why. Some people dream of things that never were and ask why not. I think of things that could be and make them funny. My name is Jon Webster and I’m a satirical writer." This, however, did not stop some people from believing some stories to be true. One even received over 118,000 views in one day, over 10,000 shares on Facebook, and 671 tweets on Twitter.
In this book, you will find out the true meaning of the Bible verse which reads, "Thou shalt not lie with mankind as with womankind." As you read the pages of this book, you will come across a parody of Bruce Springsteen's Fire about how much Mitt Romney likes to fire people, an announcement of the next book in Bill O'Reilly's "Killing" series entitled Killing Tupac, how the equality signs on people's Facebook profiles confused prominent Republicans, the recall of a male enhancement product called "Bee" Massive which used live bee venom to sting, inflame, and enlarge men's penises, and over 130 more satirical articles!
Jon began writing satire in March of 2013. He would go on to write satire for the Guardian Express - Las Vegas as well. Over half of the articles in this book are being published for the first time and can only be seen in this collection!
Jon Webster is the published author of two other books as well. Nothing Sacred: An Atheist Quote-A-Day Calendar and Blasphemy: Atheist Quotes and Essays by an Apostate can also be purchased through FastPencil.com, Amazon.com, and BarnesandNoble.com