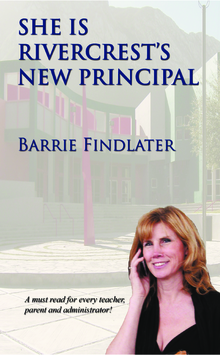 SHE IS RIVERCREST'S NEW PRINCIPAL

Stephanie Stolkes took over as the principal of Rivercrest School replacing Howard Jones who had been in that position for decades. Their personalities and priorities for running a school couldn’t be further apart. Her appointment was controversial because she was selected over long time vice-principal John Benning who most suspected would continue the Jones tyranny into perpetuity. As a mother of two, a professional with valuable administrative experience in previous schools and a rich background as a teacher in several international schools, you would think her job would be easy. It was not. She faced incompetent teachers, a bomb threat, student accidents, racism, troubled kids and an accusation of sexual abuse against her vice-principal. As Stephanie faces the diverse challenges of each school day the reader is treated to an insider’s view of the life of a school. For most people their memories of what it was like at school are very different from what happens at Rivercrest. Sadly, what happens at Rivercrest is not unlike what many principals face in our schools of today. You will gain a new admiration for the contributions of school administrators as you are treated to a blow by blow description of a young female principal struggling to overcome some terrible things in an outrageous community web. This book is a must read for every teacher, parent and administrator.

BARRIE FINDLATER served for nearly four decades as a principal, superintendent and educational administrator in schools around the world. He enjoys his retirement years by spending winter months in El Golfo de Santa Clara in Mexico and summer months with his family at Jackfish Lake, Alberta, Canada.