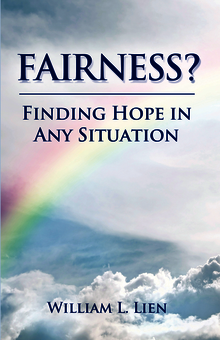 FAIRNESS ?: Finding hope in any sitiuation

William (Bill) Lawrence Lien was born in Borea, Wisconsin on July 31, 1928. He and his wife Betty have been married 60 years. They have three children and seven grandchildren. Bill earned his B.A. at Vanguard University in Costa Mesa, California, and his M.A. at California State University at Los Angeles where he majored in School Administration. Bill served two years as a Military Policeman in the Korean Conflict.

Bill's years in public education total 45. In 1986 he retired as a principal and began substituting for principals or teaching Special County classes for troubled youth. These students were reluctant learners, who were often angry at themselves, their parents and extremely annoyed at the entire world. They felt abandoned and forsaken. They represent modern day people who have lost their way. Bill's education and experience allow him to write with authority and analysis of Job and relate it to today's times and situations. Since 2000 Bill has been his wife's main caregiver as she is increasingly handicapped with post-polio syndrome and rheumatoid arthritis and requires more attention. They are learning together how to cope with incessant pain. Bill is an avid outdoors man. He loves to spot the earliest flower blooming or identify a new bird on his bird life list, and bag a mountain peak or two.