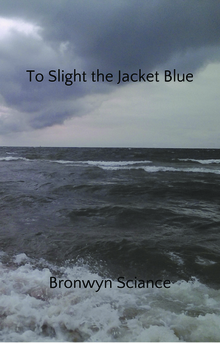 To Slight the Jacket Blue

When Ned is sent to the Caribbean to hunt pirates, he hopes to avenge the death of his best friend, Sam. His sweetheart Jane fears for his safety, especially against the pirate known only as Captain Bluejacket, the only pirate in the Caribbean who hunts Navy ships, and whose philosophy is simple: Surrender or die.

Ned at last encounters Bluejacket--and discovers his once-dear friend. Sam spares Ned's life and forces him to join the crew. Gradually, the two men attempt to repair their friendship and begin to build an accord...only to find that time has matured their relationship into something more.

When Jane learns of her sweetheart's capture, she stows away on the rescue ship, determined to save Ned. But as the search stretches into weeks and then months, she begins to fall for another, and must choose whether to remain faithful to Ned, or to take the chance at happiness.

What will become of Ned and Sam? Will Jane follow her heart or her head? To Slight the Jacket Blue explores the lives of these three restless spirits as they attempt to reconcile the world of their birth with the world into which they have been thrust.