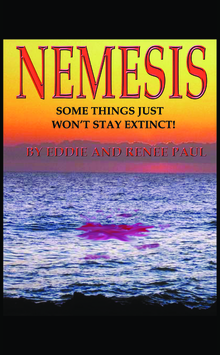 There are creatures that have lived before us that we have no concept of, how they looked or how large they were, or even if they still exist. We always assume that they are extinct then later find out that many are not. This is a story about just such a creature and a rag tag film crew that was desperate enough to bring one to the surface and film it only to let it get lose in our world, a world with dinner at every beach. Now a small research group has to figure out how to put the monster back in Pandora’s Box

Renee and Eddie live in Southern California. They traveled the World exploring the unknown, Renee with a background in Banking and Eddie with a background in Inventing and fabrication. Both have an insatiable curiosity for the unexplained. This shared interest has fueled the fire and drove them to travel extensively where they have dove with all manner of sharks, rays and other sea creatures. They entered dozens of old sunken ships and aircraft wrecks as well as dove the icy waters of Lake Superior for sunken logs and treasure. They design and build their own specialized equipment for themselves as well as others; from animatronic seals, turtles, sharks, scuba divers, fish, bite proof plastic shark suites and cylindrical shark cages to full size swimming Great White Sharks, some that were even piloted by scuba divers; as well as submarines for filming on Shark Week and do a lot of the required props and effects needed for Hollywood. Testing their own equipment they have been in the center of more than one shark frenzy for Discovery, and in the center of a large school of angry Barracuda for a segment of Rescue 911. The first to dive many locations such as the Bligh Reef just after the oil spill by the Valdese tanker and discovered a few mysteries in the area that could be subjects for future books. They began writing hot selling non-fiction books to teach people how to build and fabricate as well as fiction novels.