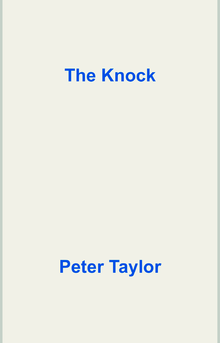 The Knock is about a tabloid newspaper and the door-stepping adventures and misadventures of its super-competitive reporters and their daily involvements in people’s everyday lives. It takes a look at how reporters operate out on the street and knocking on doors to get stories.
Some of the characters in my books are slick tabloid reporters who have developed the technique of doorstepping in to an art form.
The central character has not yet developed the hard skin that news reporters need to carry out their work on a daily basis and is asking questions about how far doorstepping on people, in all kinds of different circumstances, should be allowed to go in the constant pursuit of information.
I started writing my book when the phone hacking trial was taking place in Britain. It has been one of the longest and most expensive trials in British criminal history. It was all about intrusion on private lives by hacking in to telephone lines.
Phone hacking was a technique used to listen to people's mobile phone voicemail. People in the news - celebrities, politicians and even crime victims – were targeted so journalists could find angles on stories that would get them ahead of the competition.
They would listen to private messages left on voicemail, make a recording of them, and use the information to help write stories.
This was criminal activity which had to be stamped out and it showed just how far a few unscrupulous individuals were prepared to go in the pursuit of a story. On another level, it also highlighted press intrusion as a central issue in society.
I started writing my book while all this was going on because I wanted to write about the ways in which reporters are always faced with the issue of intrusion in to private lives on an almost daily basis. I know quite a bit about this after a long career spent as a reporter/writer working in regional and local newspapers.