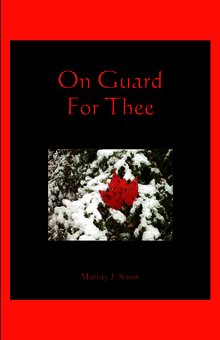 On Guard For Thee

Captain James "Dusty" Morgan, is critically wounded during a NATO security patrol through Bihac, Yugoslavia, and one of his soldiers is killed. As Morgan recovers from his wounds, he stumbles upon the reason for the rash of weapon failures that have caused the deaths of six other soldiers and that continue to plague parts of the Canadian army.

Morgan’s investigation plunges him into the world of national politics, corporate intrigue, and a battle for the very future of Canada itself – a battle that will see Canadian soldiers firing on Canadian soldiers.