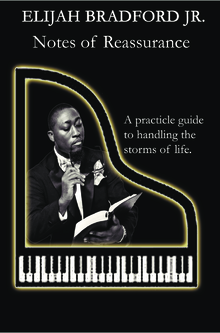 Notes of Reassurance: A Practicle Guide To Handling The Storms of Life

Ask Elijah Bradford what he loves about his music and ministry. The answer is as warm, embracing, and reflective as his songs. “The music is anointed. HIs desire is to offer hope as opposed to just talking about the problem. All the way to his core he is anointed.” A prolific gospel singer, Bradford is building an avid fan base within the realms of both Gospel and Secular Music. He has often been compared to R &B sensation John Legend, and the sheer power of his voice is reminisant of Pastor John P. Kee and the late Rev. James Cleveland. His music can be described as “Eclectic Music – it’s a mixture of everything. Elijah Bradford’s goal is to be unique. He feels the only way to do that is for people to be able to identify with who he is and what he stands for. That is key to where he is and where God is taking him.