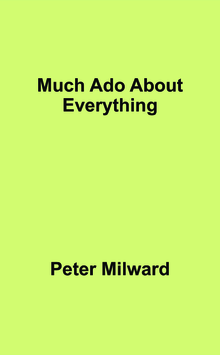 Much Ado About Everything

Following the suggestion implied by Shakespeare in the title of his 'Much Ado About Nothing', I offer my thoughts on Nothing and Being, on Creation and Annihilation, on Goodness and Truth, on Knowledge and Wisdom, on Nature and Grace, on Conscience and Innocence, on Sense and Nonsense, on Humor and Humility, on Humanity and Divinity, on Man and Woman, on Medieval, Renaissance and Modern, on Tradition and Revolution, on Culture and Christendom, on Education and Evolution, on Ecology and Economics, and on Everything, as it were through Shakespeare's eyes. In these chapters there is an undercurrent of contrast between the "mighty opposites" of Shakespeare, as looking back to the ideal of Christendom, and Bacon, as looking forward to the rise of Science and the British Empire.