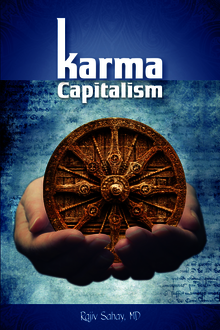 As eloquently stated in Gita, "No one can remain without performing action even for a moment. Every creature is helplessly made to perform action by the gunas (properties) borne of nature". When one performs karma, the person performs karma for material benefits or spiritual benefits. Some people perform one form of karma more than the other forms of karma.

Monetary policy change should follow GDP growth rate and not try to stimulate GDP growth to achieve a certain objective as it will end
up favoring one group of people over others which will lead to mal investment and severe business cycle downturn. Besides, excessive
expansion of money supply leads to inflation.

Karma Capitalism advocates a wage difference (after taxes) between
the lowest earner and highest earners to be in the ratio of 1:6. However, it does not limit it to that level in all cases.

In Karma capitalism, children and their immediate caretakers, i.e. their parents in most instances, have the first right on the resources of the country.

Karma Capitalism lays emphasis on the age old tradition of marriage to remove poverty among children. Government cannot become the missing parent in the household.

Karma capitalism aspires to end the effects of poverty on children
such as malnutrition, poor health and lack of education.

This book wants to start a debate around the role and limitation of
the government in the economic affairs of the people.