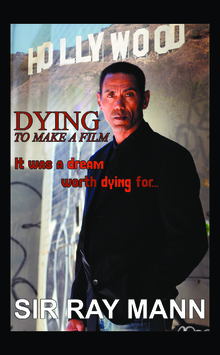 DYING TO MAKE A FILM: It Was a Dream Worth Dying For

At the age of 23, childhood actor Ray V. Mann is ripped from his seat and thrown overboard into the Atlantic Ocean. Sharks immediately begin to circle. The young man struggles to stay afloat, pleading to be let back onto the boat, but the man above is convinced Ray is a cop. They’re on a drug run, from Cuba to Nassau, and this is a test. The sharks close in and he can’t swim anymore, and as Ray goes under he wonders how it came to this. All he wanted was the money to make his own film. Now all he wanted was to live.

Written with a surprising amount of honesty and levity, "Dying to Make a Film" isn’t just a book about drug cartels, hit men and missing millions. It’s about what it means to do whatever it takes to chase a dream. It’s about not only surviving life’s sharks, but also surviving life’s unattainable promises.

After being pulled back into the boat at the last moment, Ray becomes a trusted member of a Colombian drug cartel that works for the world's number one cocaine boss Pablo Escobar, shipping hundreds of kilos of cocaine to Miami, Detroit, Chicago and New York City. Between sitting in high-power meetings with some of the most wanted men in the world, Ray scribbles out his screenplay in dark hotel rooms with his gun nearby. Life inside the cartel grows more dangerous by the day, the DEA is hot on their trail, and Ray is forced to jump out of the back of a moving train with two suitcases of cocaine. When three million dollars comes up missing, Ray is fingered as the mastermind, and hit men are deployed. Still, he writes his film, desperate for the simpler life as an actor, and he manages to somehow stay alive.