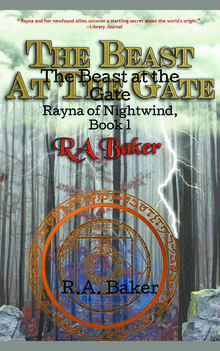 From the stunning imagination of R. A. Baker comes the first novel in his Taren series. In the troubled land of Taren rules a bitter, oppressive regent named Nephredom, who alone maintains the ""Gate""—a psi-magical barrier that contains thousands of mutated beasts, that were once men. However, the strain of keeping the Gate has pushed Nephredom to the edge of madness, and it is only a matter of time before the Gate opens. . .

Into this world comes an outsider. Following a bizarre lightning storm, college student Rayna Powell finds herself lost and alone in Taren with only her stubborn instincts and logical mind to guild her. She is a student of science, but what she experiences in Taren defies science, and forces her to come to terms with the unknown powers growing inside her. Many of the people of Taren believe Rayna to be a ""Power"", the greatest kind of mage, who holds wields the legendary ""Wild Magic Chaotic." Treachery and political strife run rampant as opposing factions clash, with Rayna caught in the middle.

She reluctantly joins forces with a mysterious woman with a bounty (imposed by Nephredom himself) on her head, who—in exchange for Rayna’s help — promises to help Rayna in her quest to return home. However, as they flee and hide from Nephredom’s red-robed minions, the price of the stranger’s help may be higher than what Rayna is willing to pay.

Rayna of Nightwind is a bold sci-fi/fantasy hybrid, resonating notes of Silverberg and Terry Brooks, yet starkly painted with the author’s unique brush. Compelling, and often humorous, the richly imagined world of Taren beckons.