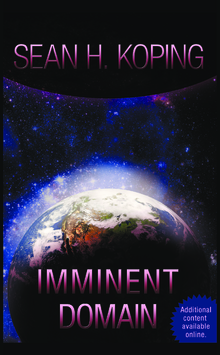 2021. The Advanced Covert Engagements Section (A.C.E.S.) is officially created to be a clandestine N.A.T.O. strike-force tasked with the elimination of potential and confirmed terrorist threats world-wide.
Un-officially, the A.C.E.S. taskforce is the result of and latest successor to the USAF's Project Blue-Book.

Old conspiracies are slowly replaced by unsettling truths and the body-count rises as a new A.C.E.S. recruit becomes one of the few human beings on the planet to uncover mankind's greatest secret... HIC SUNT MONSTRA... here there be monsters!

FIND OUT MORE AT ...www.theimminentdomain.com