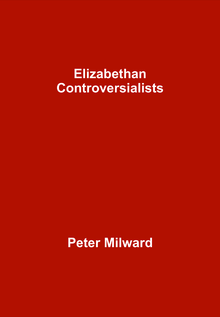 It is not commonly realized that the Elizabethan age was an age of intense religious controversy, or that Shakespeare spent the first decade of his dramatic career at the height of this controversy, or that his "drama" was not only that of his stage but also that of his age. The controversy was, moreover, changing from decade to decade, not only between Catholic and Protestant during the first ten years, but also among the Protestants between those who accepted the Elizabethan "reforms" and those who desired a further reform according to the model of Calvin's Geneva, namely the Puritans. The situation was further complicated by the arrival of the first Jesuits, Campion and Persons, in 1580, when the Puritans were brought in by the Government to counteract the Jesuit influence. Only, when this controversy passed, the Puritans renewed their challenge to the Elizabethan Church about the time Shakespeare entered upon his dramatic career. Thus it seems as if the Church was fighting two series of opponents, from the left and from the right, as what came to be called a "via media". Only, in this fight it was able to rely not only on the word but also on the sword, with the Government strongly behind the Church. Finally, even among the Catholics, disputes arose towards the end of the reign between the Jesuits and the secular priests, promoted by the Government.