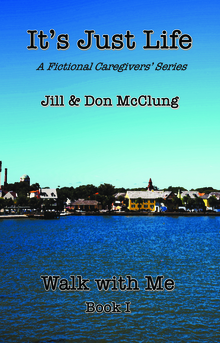 Walk with Me is the first book in a series of novels dedicated to adult child caregivers of aging parents. Each volume details the experiences of several fictional extended families who have to cope with a variety of medical issues that arise as the parents get older. It is a story of real life.
Book I introduces the characters and follows them through their eventful, sometimes chaotic, lives, as the adult children discover, unwittingly, that they are needed to help their parents face the challenges of disabling disease processes that afflict them as they age. These conditions include reversible and irreversible dementing illnesses, including the most prevalent, Alzheimer’s disease, as well as stroke, Parkinson’s, traumatic brain injury, and osteoarthritis. As the plot unfolds and certain characters become ill over time, their doctors’ visits and hospitalizations are depicted with vivid realism. Practical medical information is presented as part of the story, engaging readers in the characters’ lives and illustrating procedures, such as how a neurologist differentiates dementia from normal memory loss, along the way. Disease symptoms, diagnostic approaches, medical and rehabilitative interventions, and pertinent legal documents--all essential to understand when such inevitable situations emerge--are described accurately. The medical scenes, supplemental Resources, and Glossary included at the end of the book are research-based. Included also is a Planning Booklet directed to a loved one that highlights the most crucial legal steps to take to prudently prepare for the later years of life.
The story portrays the earliest stages of the children’s awareness that their support is indeed essential to their parents’ welfare. The second and third books in the series follow the families through the later, more intense stages of disease progression and caregiving. All explore the drama of family relationships as they evolve when aging and medical issues arise.