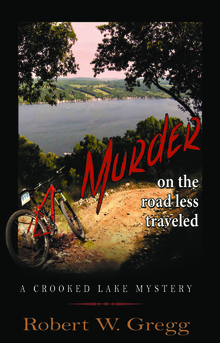 Murder on the Road Less Traveled

Bob Gregg, the author of Murder on the Road Less Traveled, has been an avid reader of murder mysteries since he was a boy of ten. So it is not surprising that when he retired from a career as a professor of political science he would try his hand as a writer of them. This is the thirteenth in a series of crime novels, all set on Crooked Lake, where he and his wife have long had a summer cottage. Crooked Lake is a jewel in New York’s Finger Lakes, normally beautiful and peaceful, but not immune to the occasional act of violence which invites a novel in which law and order must be restored. That task in Gregg’s novels falls to a young woman sheriff and professor of music who vacations on the lake in the summer and has become her lover and partner. While most murders are rooted in personal grievances and troubles that have festered over time in increasingly fraught relationships, this mystery involves racism, an issue that has historically been a problem in American politics and has recently seemed to raise its ugly head again. Fortunately, Crooked Lake has not been a setting for racial violence, but this, after all, is a work of fiction, and the sheriff and the professor must determine whether two deaths are racially motivated. The plot begins with an annual biking event from which one of the cyclists does not return and also requires the sheriff to investigate the disappearance of a mentally retarded boy who is working for a strange loner who raises hogs not far from the route the cyclists have taken. As a result, Gregg’s latest murder mystery not only takes readers back to the lake and the characters that have been featured in all of his novels but also has something to say about an important political issue.