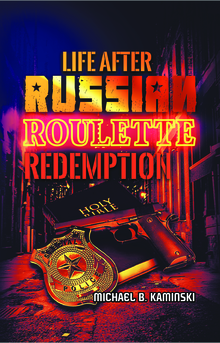 Murder, corruption, sanctioned killings and destroyed lives still haunt an alcoholic ex-narcotics detective as he prepares for ordination in seminary. He seeks forgiveness and redemption as he confronts his shadowy past in the dark cave of his psyche and soul.

LIFE AFTER RUSSIAN ROULETTE: REDEMPTION is a psychological thriller based on true accounts from the life of Michael B. Kaminski during the years he was an undercover police detective in Baltimore, Maryland during the 1970's.
Immersed in an underworld of drug groups, organized crime associations and police corruption, Kaminski became addicted to "the game" as he wrestled mentally and emotionally with illegal, unethical and immoral choices. The lines of right and wrong, good and bad began to blur before his eyes as he justified the end goal. Living under three fictitious identities for almost five years, Kaminski's conscience created a moral downslide that inevitably led to depression, suicidal thoughts and mentally destructive behaviors as he numbed his true feelings and loss of personal identity with increased addiction to alcohol.
After resigning from the police department with three contracts out on his life, and after two failed attempts, Kaminski went to work as a licensed private investigator for the criminal lawyers he worked against undercover.
Eventually, a near fatal accident almost ended his life. High on morphine in a hospital, Mike would make a commitment to God for saving his life, enter seminary and receive ordination. After struggling with his faith, Kaminski would finally find what he had been searching for all his life - LOVE.

At first glance, you might think you know how police and undercover detectives work. But you could be dead wrong. How an individual enforces the law, many times, is reduced to personal decisions. Hidden within the plot of this story is a series of inner conflicts that many people in law enforcement make in the line of duty.