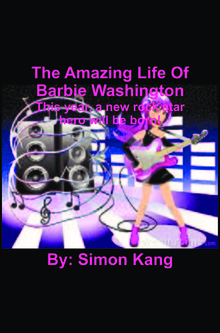 The Amazing Life Of Barbie Washington: This year, a new rock star hero will be born!

As an average teenager, 14-year-old high schooler Barbie Washington has always dreamed of becoming a rock star someday. That day is more closer than she thinks. Barbie Washington is an average 14-year-old high-school teenager who has always had a dream of being an amazing rock star someday. However, that day is more closer than she thinks. When Barbie Washington encounters a record producer named Fletcher Shine who promises to make her a star, it's a wonderful offer that she simply just can't resist. Soon, Barbie has all this fame and money to last her for her whole entire life. But is it really worth all of that just to become famous? After all, Barbie is just a teenager who has school and friends. Is the record producer really out to make Barbie famous or is he really a sneaky, corrupt devil who's out to use her for his own sinister purposes just to get rich? Barbie must learn to make the right choices. She must choose between the life of an average high-schooler so she can be with her friends and family and the life of a rock star? Will Barbie be able to make the right choices in time or will she be scammed for good? Find out in this comedic novel filled with humor, fun and musical numbers which will keep you laughing nonstop.