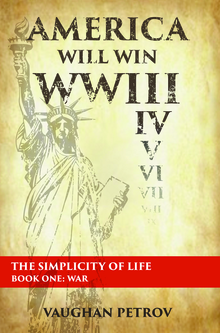 The Simplicity of Life: America Will Win WWIII

This book is a philosophical poetic form of thought. It uses stories, songs and reality to discuss the topic of WAR. This is my look into the reality of what WAR is. How WAR is created. Why WAR is created. And an overview of the peaceful solutions to the excuses that people use for such war.
The book is meant for all the leaders of the world to read.
I use the emotion of songs and stories to convey what I feel when I think about all the wars that are raging on.
I want people to see the simplicity of choice. The choice being: To kill or not … as a solution to problems.
Every country is facing the same internal problems. These problems cannot be addressed until the threat of WAR is eliminated. There are countries that have leaders, which continue to use the threat of WAR to push the world around. There are groups of terrorists that use WAR for their own gains. The good countries of the world try to talk and rationalize, but it seems to be ineffective against the leaders lost in ignorance.
If we could get each country to at least understand: The past is the past. War has consumed this planet, because of the failures to compromise and share. War is no longer needed. There is no such thing as world domination. There is no way for any – one – country … to rule the world. There is no way for – one – man to become king of Earth. The fantasy needs to end. Wake up to the reality of life.
There is only working together … in peace.
This is book one in a series called: "The Simplicity of Life"