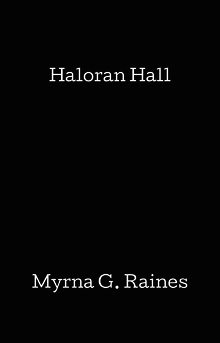 Haloran Hall is a novel that takes place in nineteenth century England and Scotland. It seems the new Earl of Haloran Hall is seeking a wife to provide an heir, and an invitation goes out to the families with marriageable aged daughters. Shalan is determined that she not be chosen as the Earl's bride, as she desires to be no man's Lady. Besides, who wants to be a wife to some stuffy and stodgy, elderly Earl? She feels she is saved from that fate, however, when a message arrives that the ball has been cancelled due to the Earl being recalled to London due to an urgent matter.

Riding over the Moors in exhilaration, Shalan is taken aback when she finds a mortally wounded nobleman, and somehow manages to return with him to her father's castle, where, with the help of her maid, nurses him back to health. The man is joined by his cousin from London, and Shalan learns his true identity. Through a betrayal by her own father, she finds herself very much in attendance at Haloran Hall where she is caught up in a conspiracy that threatens her very life!