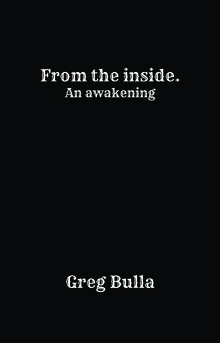 From the inside.: An awakening

This is the long awaited and anticipated follow up to “Standing at the door, where the author opens up with all his questions about life. Being cast into chaos at an early age, taken by his father at the age of six, along with his two older siblings, Vickie and Donald and put into an orphanage without their mothers knowledge, paved the way for Greg into an uncertain, insecure life where he inevitably spent most of his juvenile years behind bars in California where he was born and raised. Greg didn’t stop there. Caught up in drugs and criminal activity, Greg ended up in Folsom prison at the age of 19 after having already spent a year in a last hope juvenile camp where he would attempt to escape and having been successful before this attempt, landed him in Solidad state prison with a 3 year sentence at the age of 17. After spending 6 months in the hole for assaulting another inmate, Greg was deemed fit to be transferred to Folsom with an additional 2 years added to his sentence. While in prison he forged through the questions of life through poetry which became the compilation that made up the pages for “Standing at the door.” The follow up, “From the inside” tells the story in the same fashion, of a man that went deep, finding a truth and a system of values that he had no choice but to accept because he found the the truth is sometimes very hard and ugly and perception doesn’t change the truth but only gives us options on how to integrate it. Very personal memoirs through struggles and chaos while fighting his own internal struggles with an alter ego and a form of psychosis like schizophrenia, Greg shares each battle and victory with his readers withholding nothing. Each story told with passion and dynamic flow to be the envy of an angry rap artist. This is not the fundamental writings of a young man in search for truth, but truth found by a man who isn’t afraid to unveil it.