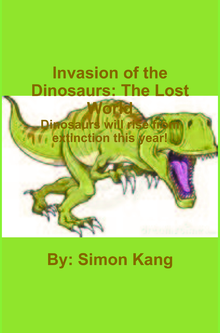 Invasion of the Dinosaurs: The Lost World: Dinosaurs will rise from extinction this year!

Do you ever wonder what the world would be like with dinosaurs? Only archaeologist Doctor Arthur Milton and his assistant, know the truth about it. The eccentric and egotistical Doctor Arthur Milton is about to go on the adventure of a lifetime. He is about to do what no scientist has ever done before. He is going to do the impossible. He's going to build a time machine and go back in time to discover the Age of the Dinosaurs. Along with his trusty, beautiful assistant, Herley and her strong weight-lifting brother, they must capture the Golden Dinosaur Egg as part of an experiment which could change the future of medicine forever. However, the dinosaurs will be hot on their trail and will pursue them all the way to modern time. Together, they must prove they have what it takes to show the world that they can acclaim their fame and prevent the dinosaurs from invading and destroying the town completely before it's too late. Invasion of the Dinosaurs: The Lost World is a fun science-fiction novel for children and adults of all ages. There will be laughs, humor, comedy and scientific fun for the whole family. It's a journey that you wouldn't want to miss. Discover the lost world of dinosaurs and how it came to be in this heartwarming, funny novel for all ages.