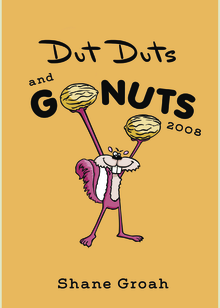 Maybe you are wondering how I came up with the name, Dut Duts and Gonuts. It’s not a profound political statement, it does not echo any deep religious sentiment, and its not a foreign language (unless of course you speak boy-ese). The name came straight from the source of most of my written material- my two boys, Mack and Cayden.

Dut Duts, this piece of the title was Cayden’s contribution. For the longest time the word “dut” was the centerpiece of the kid’s lexicon. A reasonable reply to almost any inquiry was the word "dut", sometimes in combination with similar single syllable words, for example, “Dut, Dut n’Nut Nut” or “Dut,Nut, n'Butt, Nut”. Cayden created his own language with nothing more than a few variations of the word “dut” and various changes in inflection. As an aside, any joke that Cayden was making during this period ended in the word “butt”. The word “butt” continues to be a cause of uncontrollable giggles to this day. Other words my kids find to be hilarious are: toilet, heinie-hole (thank you cable TV), scrotum, and testicle. Maybe I should not have taught them the correct terminology for their man-parts because every time I ask them if they washed their testicles I get laughed at.

On that note, the word "gonuts" comes from my oldest. As I stated previously, I told the boys early on in life what the correct terms were for their private parts. This normally happened in the tub as I directed the cleaning effort. “Alright guys, scrub your face, now your shoulders, move to your chest and belly. Now wash your testicles (giggles), gonads? (more laughter), nuts? (rolling on the floor in uncontrollable fits of hilarity)." Unable to cope with their inability to say the correct term, I asked Mack for an appropriate proxy for his “grapes”. He shot back with the word "gonuts" (gonad/nut hybrid)- it stuck.