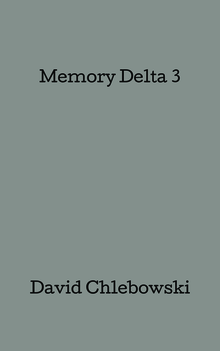 Memory Delta 3 is David's 5th sequel of the story of his life as he continues to discuss what has happened in the past and present. David Chlebowski tries to discuss some of his ordeals with many topics and subtopics that get his attention. David has felt the burden of his life as he tells his story as is. David deals with his home life, his personal life in trying to secure his part-time employment, his life in getting employed part-time, and his personal thoughts on his time off from work. David Chlebowski tries to deal with his struggles in life anywhere including at his position at a restaurant. However, David tries to make some new friends along the way while antagonism in his life has no resolution despite his best intentions to make friends and to make money. He meets certain people in his life although he discusses some of his personal history. He tries to forge alliances and friendships, only to get thwarted by many people who want him to be alone. And he tries to get into more detail about his personal life as he tells his story in the 5th sequel of his personal life.
Will David Chlebowski deal with his personal life by trying to improve his social life, or will he remain alone?