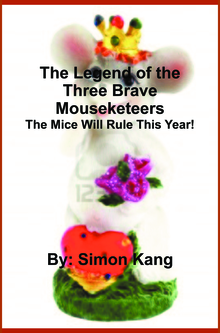 The Legend of the Three Brave Mouseketeers: The Mice Will Rule This Year!

In a faraway kingdom, there lived three ordinary mice who have dreams of becoming real-life mouseketeers someday, just like their idols. However, when their idols mysteriously vanish one day, they're suummoned by the Mouse King to take their place of becoming real mouseketeers in order to rescue his beautiful daughter, Princess Rose, from the notorious clutches of the ruthless Cat King and his cronies. Can they prove that they have what it takes to become real mouseketeers and save their beautiful mouse princess in time before she ends up in terrible danger? Discover the legends of the three brave, little mouseketeers as they attempt to go on an adventure where no mouse has ever gone before. Discover the true meaning of courage as the three mouseketeers embark on an adventure to change their destiny.