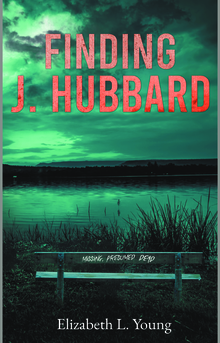 "Finding J. Hubbard" brings back amateur Black detective, Zora Erickson, who first appeared in the story, "Do You See Him Now?" This time, Zora revives the missing person cold case of her old teaching friend, Jane Hubbard, who was presumed murdered but whose body was never found. In addition to the broker who swindled Jane and feared her testimony, there are plenty of other suspects. Zora gets reluctant help from the detective in Columbus, Ohio, who originally handled the case, and he gradually warms to their partnership. Midway through her investigation, Zora begins receiving anonymous threats and realizes her own like is in danger, but she has come to far to stop. Finally, without telling anybody, she strikes out on a trip that will give her the shocking answers she has been seeking.

Elizabeth Young is the author of two previous mysteries: "Do You See Him Now?" and "The Hand in the Window", as well as a third novel - the international thriller "FUGO: Terror from the Sky." She has also written two children's books, "Dozens and Dozens of Cousins and Cousins" and "Oodles and Oodles of Poodles." See her web site at: www.eyoungbooks.com