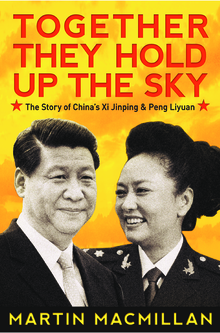 TOGETHER THEY HOLD UP THE SKY: The story of China's Xi Jinping and Peng Liyuan

Very few Chinese names have become, as Shakespeare's Henry V put it: "Familiar in his mouth as household words" to many westerners. Mao, Confucius, Yao Ming, Jackie Chan – there aren't many. But that is about to change. China’s in the midst of its once-in-a-decade political power transition. The Chinese “princeling” Xi Jinping seems set to assume the Presidency of China in March 2013.

Xi Jinping (pronounced ‘Shee Gin-ping’) will lead China into its most important decade in modern times, and his actions will directly affect the nearly 1.4 billion people in China along with the remaining 6 or so billion non-Chinese on this planet as well.

But that’s just half the story. For the first time in modern history, the new President of China will be accompanied by a First Lady who is even more famous than her husband. Peng Liyuan (pronounced ‘Pung Lee-yahn’) has been a household name in China for thirty years. Often known as “the Singing General”, Peng Liyuan is a glamorous and gifted folk singer and operatic soprano as well as being a Major General in the People’s Liberation Army. She is instantly recognizable throughout China and enjoys the adoration of the Chinese people. She is also “the Daughter of the Party” and extremely influential and well-connected regarding politics and the arts in China.

Together, Xi Jinping and Peng Liyuan are the new “power couple” on the world stage. The personal, family, and cultural factors that have shaped them set a dramatic backdrop to their stories, for theirs’ is indeed “the story of modern China”.