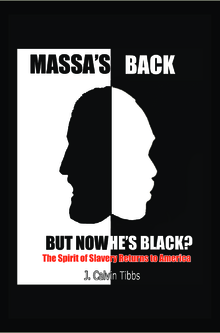 Massa's Back but Now He's Black?: The Spirit of Slavery has Returned to America

A Massa spirit is an invisible but real influence, which shackles people thru various forms of bondage. A controlling spirit assigned to all races, every sector of humanity receives a disguised invitation for a limited partnership. Churches, civic groups & individuals are among the solicited. Governments are also infiltrated to facilitate the removal of liberties thru the exchange of assistance programs. The Massa’s strategy is so flawless it is defended and celebrated by the very people it limits.

The Massa spirit is never satisfied with its territory & is always hungry for new recruits. And once the rational looking & the victim minded train on ways to conceal the footprints to bondage, truth-avoidance is taught. Massa has contempt for personal liberties and uses “initiatives” to control and fuse servitude with dependence.

Many don’t recognize the Massa spirit’s messages that masquerade as personally thought & agreement. His power-grabs are swift, the manipulation of truth… decisive. “Party-Loyalty” is so requiring, its members side with political parties over relationship with God & common sense.

Lies and deception give the Massa its strength, but truth disarms this evil power. It took several decades to establish error as truth’s replacement, but it’s done; therefore, economic & moral decline can be accelerated.

At the judgment mankind will stand before God. Some will rely on the blood of Jesus as their sin substitute others will desperately explain their good works & best intentions. Very similar to the lamb’s blood over the doorposts & lintel during the exodus, (Ex. 12:23) those in relationship with Christ will be exempt from wrath.