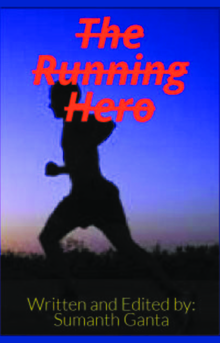 It was the start of the 2013 Olympics and the whole stadium was on the edge of their seats, completely still and quiet. All the racers including Alex “Bolt” Stool took their positions at the starting line of the red, and newly laid track. The referee gets ready to start them off by holding up his gun with his long and bony pointer finger on the trigger.

Alex wakes up to see himself just wiggling around in his bed like he was crazy. The sound was the alarm going off next to him, not the gun-shot. He gets out of bed and turns off his alarm. The alarm was flashing 9:30 a.m in big bold numbers. He was in the middle of a really nice dream. He was a tall 6’2” muscular and fast runner who was able to run 5 miles in 10 minutes, he was taking his position next to his opponents, Jim, Jimmy, Jimmison, John, Johnson, and James. But just then his alarm rung and he got up. He goes to the bathroom and looks at himself in the mirror. He was an enormous 5’3” boy weighing around 150 lbs, currently in the 7th grade at J. Watson Middle School in Montgomery, Alabama. His name was Alex J. (John) Stool. He felt really depressed that he wasn't able to finish his dream, but he was determined to that, one day he could achieve his dream (may be a dream forever!) of becoming a professional track runner in the Olympics, so he decided to start trying so he set a goal for himself to lose as much weight as possible in the month of October which starts tomorrow.