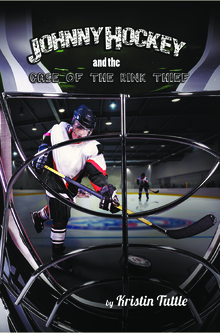 Johnny Hockey And The Case Of The Rink Thief

Fifteen-year-old Johnny Orson can't wait to play in this weekend's elite hockey tournament. Not only is this a chance for his team, the Missouri Eagles, to prove they can compete with some of the best teams in North America. There are scouts in the bleachers, looking for players to tryout for the National team.
Johnny's dreams are threatened when his skates mysteriously disappear. But it's not just him. Several goalies in the tournament have also reported missing gear .
Why would someone steal hockey gear? Is it a personal vendetta? Or is someone trying to sabotage the rink and the tournament? Determined to find out, Johnny and his friends find themselves smack dab in the middle of a mystery.
Suspenseful and action packed, Johnny gets more than he bargained for in this on and off ice adventure. Will he find his skates? Will he catch the thief? Will the Eagles win the tournament? Or will everything he's worked so hard for be ruined?